Stocks have become more accessible than ever for even the smallest of investors. Low-cost brokerages allow even retail investors the opportunity to invest in a diversified portfolio of global equities, while fintech apps allow even fractional purchases. Numerous websites provide free “research” and public companies usually have extensive investor relations sites. Does that make investors life easier? Can investors now make quick and profitable decisions? The truth of the matter is that while it is easier than ever for investors to invest, stock picking still requires proper research and digging deeper into the numbers to generate alpha. Even more worrying is that basic free financial information found online can often be wrong. Challenges don’t just stop there as even when the info is correct it still isn’t enough to generate profits. Correct and widely known information is usually already priced into the stock price. In this article, via a few examples, I aim to demonstrate the need for diligence in research and where doing the work does pay off. There is no free lunch!

Alibaba is a Chinese e-commerce and technology company with over 1 billion annual active consumers. Below are statistics from Yahoo Finance on BABA. According to Yahoo Finance, EV/EBITDA is 2.4x and P/E is under 20x. No brainer, right? Wrong! Yahoo Finance takes $403b EV and divides it by CNY 171 EBITDA to calculate the 2.4x EV/EBITDA. Firstly, notice the currency error. They took dollars which is currency of the ADR and divided it by EBITDA which is in Chinese Yuan.On Bloomberg, the actual EV is CNY 2.4 trillion. So, 2.4 trillion / 171 billion gives us 14x EV/EBITDA. Perhaps, we can forgive Yahoo Finance for this mistake. Unfortunately, it doesn’t end there. 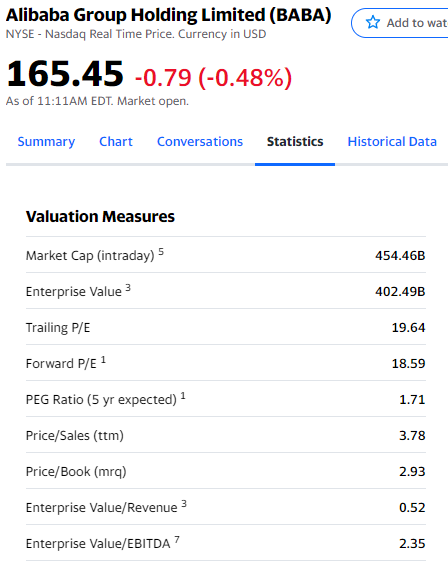 Historical EBITDA appears exaggerated not only on Yahoo Finance, but also on other well-known websites such as Morningstar, Koyfin and Tikr. In 2021, according to Yahoo Finance normalized EBITDA was CNY 218 billion in 2021, CNY 197 billion on Morningstar, CNY 157 billion on Koyfin, and CNY 157 billion on Tikr.  All of these, of course, are free. Bloomberg that according to media is being “disrupted” by these free apps, states a CNY 111 billion figure. This is because Bloomberg correctly adjusts for abnormal items. Bloomberg is not flawless, but this is a case where Bloomberg demonstrates why it’s so expensive.

But an educated investor doesn’t need Bloomberg to calculate a better EBITDA figure than many of the free websites. BABA’s 20F SEC filing shows CNY 90 billion in operating income (page F-6) to which you add CNY 48 billion in depreciation and amortization (page F-13), subtract CNY 66 billion in gain on investments (page 134), add 15 billion on impairment of investments (page 134), add CNY 18 billion on government fine (page 134), and CNY 7 billion in operating lease cost (page F-57).  This is all done to adjust for the one-time effects. The result is CNY 112 billion in EBITDA. So, by digging into the numbers an investor can achieve better insight than the spoon-fed numbers given by free access websites. And by correctly adjusting the figures we see that EBITDA declined from 2020 to 2021 despite a 40% increase in sales. This is one of the reasons that we are cautious regarding the specific company.

Naked Wines is an online wine retailer with listed shares in the UK. The stock came to my attention when it was presented by Simon Caufield (an experienced professional investor and entrepreneur) at the Cyprus Value Investor Conference. If someone in September 2019 looked at just the numbers for FY19 they would see a loss-making company that had a market cap of around GBP 180m. However, looking under the hood revealed a focused company with a very interesting business model that was loss-making because of its investment to acquire new customers and grow. Stand still EBIT was GBP 10m so the company was actually trading at 18x operating profits. Many investors sold the stock as the company sold its low growth brick and mortar business and cut its dividend to focus and invest in the higher growth online business that had become cash flow positive. Investors that ignored the negative earnings and understood the business model saw their shares rise from around 252p to over 700p in the next 18 months.

Michael J. Mauboussin and other finance practitioners and academics advocate a few other adjustments as well. One such adjustment is capitalising investments made that are expensed on the income statement. The two assumptions that need to be made are (1) the percentage of each line within selling general and administrative expenses that are allocated to investment and (2) the period of amortization. By applying a similar approach to Mauboussin, we estimate an additional $46 billion in invested capital in 2016 and a $17 billion boost to NOPAT thus the ROIC rises to 31%. If we apply 2017 NOPAT over the average of invested capital of 2016 and 2017 then ROIC is 23%. So, what initially looked like a low ROIC (9%) turned out to be an exceptional ROIC (31%). The stock rose from around $1000 in 2017 to over $3000 currently.

Even if an investor is passive, they still need to dig into the numbers! In 2017, I learned of a significant discrepancy in the P/E ratios of the Russell 2000 index and the iShares Russel 2000 ETF that tracks the Russell 2000 (see WSJ article). The index had a P/E ratio of 41x but the ETF had a P/E of 19x.  How could this be? The difference was that the ETF excluded all loss-making companies in the calculation! Even Morningstar, prior to 2005, excluded stocks with negative earnings and P/E ratios above 60x. The problem is the lack of an industry standard for calculating average price ratios. Some institutions use the arithmetic weighted average, while other use the harmonic average, a trimmed mean, a median by market value or a median by count.

There are additional examples of problems passive investors may face with ETFs. Let’s assume a passive investor wants exposure to India via an ETF because he/she expects the local economy to grow at high rate. There is an iShares MSCI India ETF.  Reliance Industries, Infosys and Tata Consultancy are among the top five holdings and account for 22% of the portfolio. What percentage of their revenues is derived from India? According to Bloomberg, only 39%, 3% and 6% respectively! How about the iShares Italy ETF? The top 5 holdings account for 48% of the ETF. Every one of these derive most of their revenues from abroad. Buy Italy and India, take home non-Italy, non-India. I perfectly understand there are reasons behind these allocations, however if an investor is looking for diversified domestic exposure in a specific economy, then they need to dig into the numbers. This extends to other ETFs and topics as well. The iShares US Industrials ETF gives you “exposure to U.S. companies that produce goods used in construction and manufacturing” (see caption above).  The top four holdings (see right) are Visa, Mastercard, Paypal and Accenture – not exactly what one would expect. 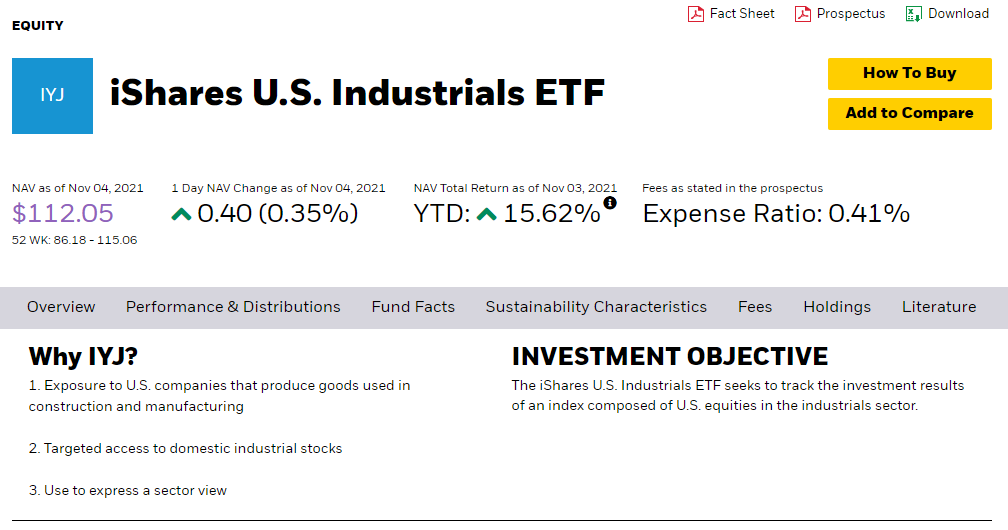 So, despite all of today’s technology and options, investors whether active or passive still need to do the appropriate amount of research to achieve their investment goals. At SPA Financial Services our active approach and research driven process has paid off for investors in both bonds and equities. Our long-only EUR bond portfolio has gained 11% over the last year versus 3% for equivalent bond ETFs. Our long-only USD balanced portfolio (bond-focused but with an equity allocation as well) has also gained 11% over the last year versus 7% for an equivalent basket of ETFs. We believe there is still a place for both analysts and active managers and hope that the above examples provide some evidence of the value of research and digging into the numbers.

Regulation of Fund Administrators in Cyprus 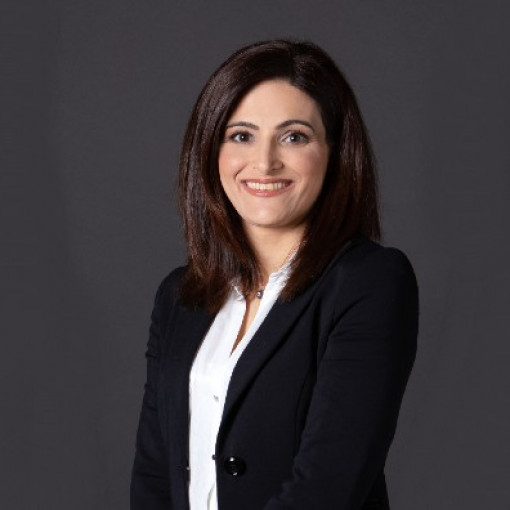 Sustainability is the present and the future of investments